Some time ago I got a message, which reminded me about the wonders of hydrogen peroxide—an ordinary item that most people have somewhere in the house. Georgia wrote … 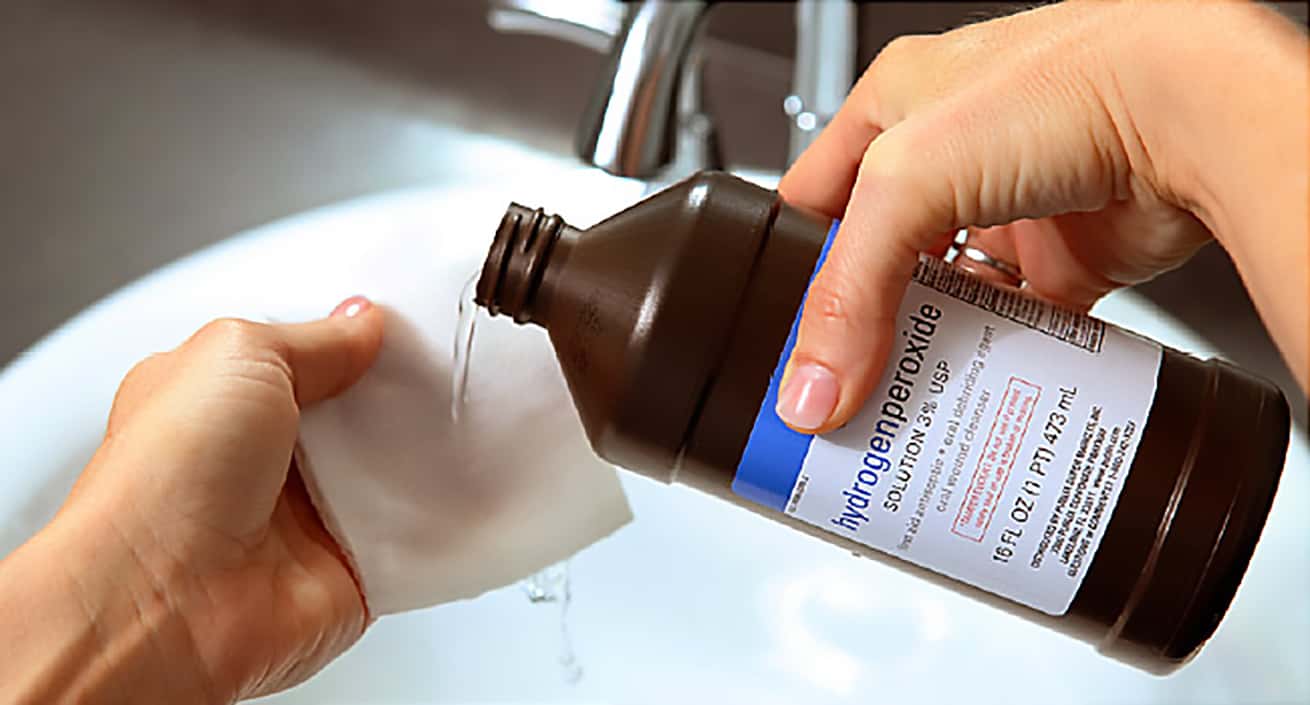 I had a cut on my hand that opened up while I was putting my expensive duvet cover on my comforter. Now I have blood stains where I touched it. Is there any hope of getting these stains out completely? I tried using a carpet cleaning solution and washing it but those stains remain. I’m worried they’ll be there permanently. Thanks so much for your help!

I’ll be honest that for many years, removing blood stains was about all I ever used hydrogen peroxide for. And because it has such a short shelf life, I was forever throwing out old, useless hydrogen peroxide.

Since then, I’ve learned so much and done extensive research and wow. The stuff is downright wonderful from cleaning to mouthwash—so awesome in fact, I never throw hydrogen peroxide away anymore. It doesn’t have time in my home to age out. That’s how much I use it.

Hydrogen peroxide, is as harmless as it is powerful both as a household cleaner and as an all-around remedy. It is non-toxic, safe, really cheap, and available in any grocery or drug store in a 3% dilution. It’s a wonderful cleaning product, first aid, and reliable sanitizer.

It has to be fresh

There’s one thing you need to keep in mind to avoid disappointment: Hydrogen peroxide has a limited shelf life of about one year when not opened, and only six months once opened, provided you store it in a dark place.

Light causes hydrogen peroxide to dissipate quickly turning it from H2O2 to plain water and oxygen. It needs to be fresh to be effective.

If it’s been opened and older than six months, throw it out. It’s useless! You will be terribly disappointed.

To make sure that you never have to throw out hydrogen peroxide again, check out all the ways you can use it around the house to make your life easier!

We are a participant in the Amazon Services LLC Associates Program, an affiliate advertising program designed to provide a means for us to earn fees by linking to Amazon affiliated sites.

Use 3% hydrogen peroxide undiluted in a spray bottle to clean and sanitize the walls and shelves of your refrigerator. Because it is non-toxic, it is absolutely safe to use around food.

You can stop paying $7 or more for “veggie wash.” Make your own by adding 1/4 cup 3% hydrogen peroxide to a sink of cold water. Wash your fruit and vegetables in the solution then rinse thoroughly with cool water.

To disinfect your dishwasher, add 1/4 cup 3% hydrogen peroxide before you close the door to run an empty complete cycle. Or if you feel like giving this hardworking appliance a spa day, use hydrogen peroxide, baking soda, and essential oils to make a scented dishwasher “bomb.”

More than likely, the reusable bags you take to the supermarket are contaminated with germs, even E-coli. That’s because grocery bags often come in contact with poultry meats and produce that have bacteria on them which causes cross-contamination the next time they are used.

These bags should be laundered after every use, but most shoppers admit they’ve never done that. An easier solution is to spray them inside and out with 3% hydrogen peroxide.

Bloodstains in kitchen towels, clothes, or other items can be difficult to remove. The secret is to saturate the stain with hydrogen peroxide. Allow to sit for a few minutes, rinse with water, and then launder as usual.

Add one cup of hydrogen peroxide to a load of white laundry to whiten and brighten without using chlorine bleach. Allow to pre-soak for 15 minutes, if possible, before you start the wash cycle.

If your cookie sheets, pots, and pans have a baked-on layer of brown, sprinkle them with baking soda, then spritz the soda with 3% hydrogen peroxide. Allow to soak for 1 to 3 hours before wiping off the mess. A really challenging situation may require a little elbow grease and a scrubber sponge to remove the gunk.

According to The Ohio State University Extension, cleaning counters with undiluted hydrogen peroxide is effective at killing E. coli and Salmonella bacteria on hard surfaces like counters when allowed to sit on the surface for 10 minutes at room temperature.

Spray your cutting board with undiluted hydrogen peroxide. Allow to sit for at least 10 minutes, then rinse clean.

Mix hydrogen peroxide with water in equal parts in a spray bottle. Apply directly to the surfaces in the kitchen and bathroom—any place you want to keep sanitized. Wipe dry with clean towel or sponge

Those yellow stains in white t-shirts are quite annoying. To get them out, follow the step-by-step instructions here: How to Remove Yellow Sweat Stains—It Really Works!

Because hydrogen peroxide is a non-toxic sanitizer, it’s perfect for cleaning plastic toys and lunch boxes.

Add 2 cups 3% hydrogen peroxide to one gallon of water. Run this through your humidifier or steamer to clean and sanitize the appliance.

Can’t get rid of that annoying odor? Try this: Add 1/2 cup fresh hydrogen peroxide and 1/2 cup white vinegar to the washing machine along with those stinky towels. Fill with hot water and your regular detergent and allow it to soak for 15 minutes. Continue the cycle as normal. That should get rid of the smell. If you still detect that odor read Solution for Gross, Smelly Towels for more aggressive treatment.

Use hydrogen peroxide sparingly to control fungi and other pests in fish aquariums. Provided you do use it sparingly, it will not harm the fish. For specific instructions, read more here.

To whiten teeth with hydrogen peroxide: Mix salt, baking soda, and hydrogen peroxide to make a paste for brushing your teeth. Not only will this help to reverse the early stages of gingivitis, used regularly, it will also remove stains and whiten your teeth.

Because hydrogen peroxide dissipates so quickly, you’ll need to make this right before every use.

At least weekly, it’s a great idea to pour some hydrogen peroxide over your toothbrushes. This can help kill staph and other bacteria, lessening the chance of introducing it back into your mouth.

You may have noticed—especially during the hot humid summer months—that old and mildew can build up quickly in a shower stall.

To kill mold and mildew, spray with undiluted 3% hydrogen peroxide and allow it to sit for 30 minutes. Rinse. The peroxide will kill the mold and mildew, but you may still need to remove the stains they left behind using a stiff brush, scrubbing sponge, or the like.

According to the CDC, hydrogen peroxide is effective at removing microorganisms, including bacteria, yeasts, fungi, viruses, and spores, making it a good choice for cleaning your bathroom.

To clean your toilet, add 1/2 cup of 3% hydrogen peroxide to your bathroom bowl to kill germs and brighten the surface of your toilet. You’ll need to leave it in the bowl for 20 minutes to get the full benefit.

If your venerable porcelain tub or sink has yellowed, you can brighten it by scrubbing the dampened sink surface with baking soda, then scrubbing with a sponge saturated with 3% hydrogen peroxide.

This is long, but worth the read, starting with this letter from reader Caren, who wrote:

I read your article on prevention for dental care and want to add another item to the arsenal for dental care—hydrogen peroxide. I was facing a $1,600 cost for scaling and root-planing for a mild to medium case of gingivitis.

While I was deciding when to make the appointment, I spoke with a coworker who was a part-time dental hygienist. She recommended hydrogen peroxide as a pre-brush rinse. I decided to give it a try.

I got a 16-oz. bottle of hydrogen peroxide for less than $1, took a swig and rinsed before every brushing. Hydrogen peroxide was nasty-tasting for the first week until I got used to it but what a difference!

My next cleaning was so good the dentist asked if I had the scaling and root-planing done somewhere else. I told her about my experiment and that $3 was a whole lot more affordable than $1,600. (I went thru 3 bottles in 6 months.)

This is a routine I began more than 8 years ago and I continue to have excellent checkups. I’m not saying this will cure anything or prevent cavities but it is another tool in the toolbox for preventive dental care.

My gums are healthier with little to no bleeding and very, very minor pain during the cleaning. I’m 54 years old with “soft” teeth that are prone to cavities and gingivitis and this was something easy and inexpensive to incorporate into my routine.

In this way, hydrogen peroxide mouthwash is effective to treat trench mouth, gingivitis, plaque, and, in some cases, help to whiten your teeth.

It is extremely important to stick to the FDA recommended concentration of 1%-3% available in drugstores and pharmacies. Using too high a concentration of peroxide may, in rare cases, cause skin injuries and ingesting it in very high dosages of 35% concentration is possibly fatal. Anything above 3% grade is potentially dangerous to use as a mouthwash.

Hydrogen peroxide is powerful both as a household cleaner and an all-around remedy. It is non-toxic, safe, really cheap,, and available in any grocery or drug store in a food- grade 3% dilution. It’s a wonderful cleaning product and a reliable sanitizer.

But there’s one thing you need to keep in mind to avoid disappointment: Hydrogen peroxide has a limited shelf life of about one year when not opened, and only six months once opened—provided you store it in a dark place.

Don’t expect to find a reliable expiration date on the bottle as its effectiveness is tied to when it is first opened, introducing light and air into the product. Hydrogen peroxide dissipates quickly in the presence of sunlight, changing it from H2O2 to plain water and oxygen. It must be fresh to be effective! 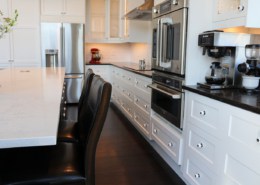 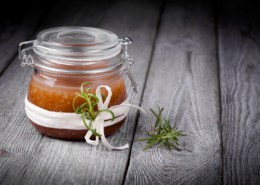 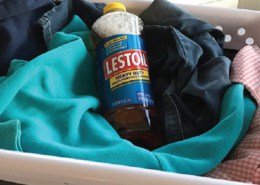 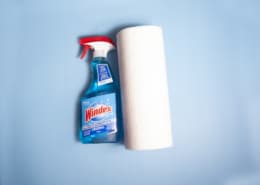 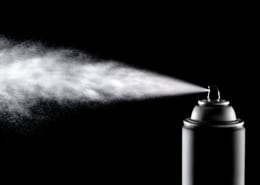