If you’re fresh out of ideas (let alone desire) to make one more home-cooked meal, but even the thought of another take-out or curbside pickup leaves you cold during these days of uncertainty and angst—I invite you to embrace these two words: rotisserie chickens. 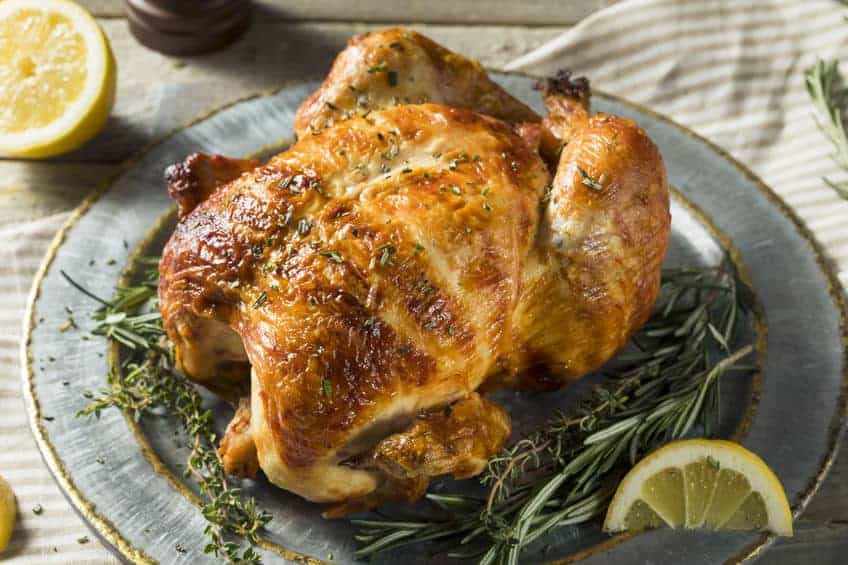 Not exactly take-out, not completely home-cooked, think of a well-seasoned, perfectly cooked rotisserie chicken as your ace in the hole; a kitchen assistant with an extra pair of hands to help you get delicious, home-cooked meals on the table in a flash.

These days, nearly every grocery store or supermarket—even warehouse clubs—offer fully roasted, hot, and ready-to-go rotisserie chickens for around $5. In fact, rotisserie chickens are so readily available, the U.S. Department of Agriculture has issued safety guidelines for selecting and storing* them.

Today, I want to give you basic guidelines for what to do with a rotisserie chicken as soon as you get home.

END_OF_DOCUMENT_TOKEN_TO_BE_REPLACED

With the price of beef skyrocketing, now more than ever, chicken is becoming the backbone of the frugal kitchen. And why not? Chicken is much less expensive than beef or pork and useful down to and including the bones. 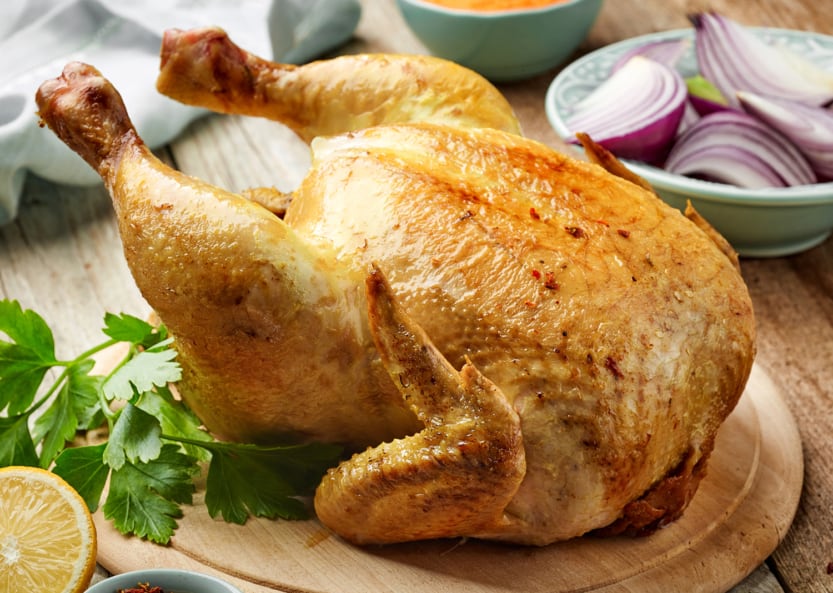 Chicken is always on sale somewhere. If you don’t want to store-hop, you can always find some cut of meat, fish, and poultry on sale in your favorite market. Eat what’s on sale and if it’s a loss-leader (that means priced dirt-cheap to entice people through the door), stock up for the coming weeks.

The most frugal way to use chickens is to buy them whole and cut them up yourself. You’ll not only save money, but chicken tastes much better when cooked with the skin and bones. A whole, organic bird usually costs less per pound than precut, skinned, and boned parts—and it tastes so much better. It is not difficult to cut up a chicken once you understand the simple steps. Here is a video tutorial or if you prefer written instructions with pictures.  END_OF_DOCUMENT_TOKEN_TO_BE_REPLACED

The venerable cast iron skillet is making a big comeback among home cooks. Our grandmothers would be so proud! And why not? The best quality cast iron skillet is super cheap compared to its pricey stainless and non-stick competitors, cast iron lasts forever and face it—it’s cool to cook in cast iron.

I must have been all of 10-years old the day I decided to surprise my mother by cleaning her old black cast iron skillet. It embarrassed me that over the years it had become so gross. Naively, I assumed that she’d burned too many Sunday roasts in it and that’s why it was never shiny with a copper bottom—like the rest of our pots and pans.

I started with household cleanser and steel wool. I scrubbed on a single spot for what seemed like hours. I couldn’t break through that burned-on “crust” to save my soul. Finally, I just gave up.

What I wouldn’t realize until years later was that I was working on a fine piece of cast iron—a skillet I’m sure I managed to un-do years of coveted “seasoning” that makes a cast iron skillet virtually nonstick.

END_OF_DOCUMENT_TOKEN_TO_BE_REPLACED

I must admit to a kind of love-hate relationship with bacon. On the one hand, my family loves bacon, which means I cook it often. And until I discovered the best, easiest way to do that, I dreaded having to fry bacon! 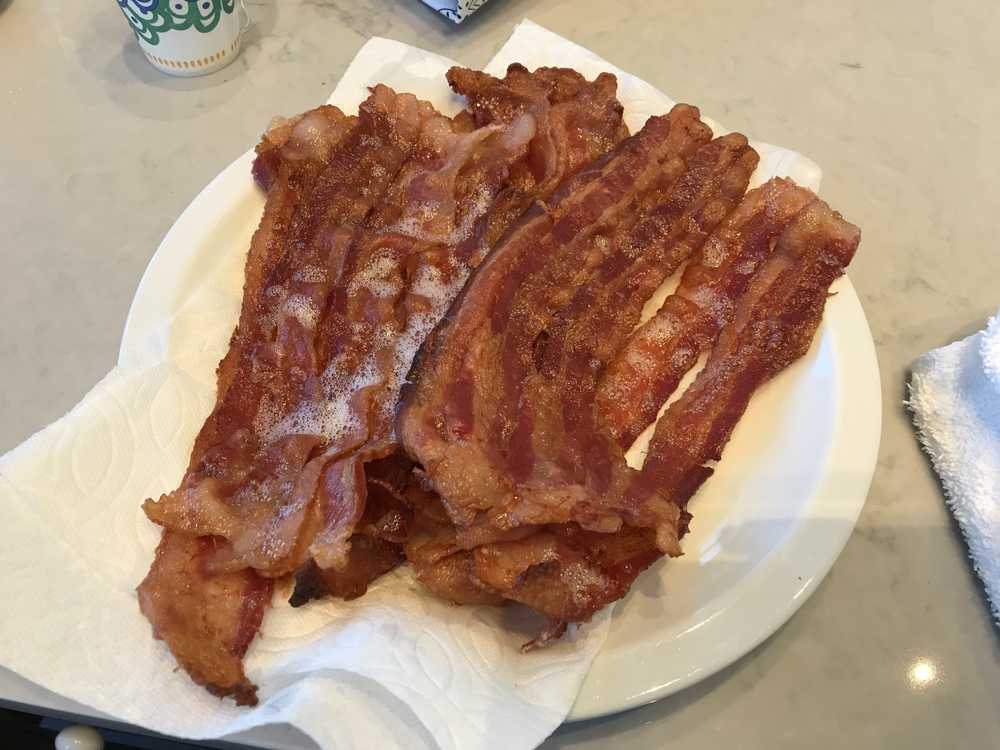 The problem in two words: splatters and smell. I’m not a fan of splatters all over the cooktop. And that lingering smell of stale bacon throughout the house for hours and beyond? That nearly knocks me out. Then there’s the problem of keeping the first batch hot and crispy when only about 1/4 pound fits well in a stovetop skillet.

Trust me, I’ve tried all the methods—stovetop, microwave, griddle, and outdoor grill. The outdoor grill has been mostly my go-to method, but when it’s 10 F. with a foot of snow out there, not so much.

And all that is history, now that I’m hooked on the absolute best way to cook bacon—in the oven. It’s easy with minimal if any splatters, the smell of bacon is all but limited to the baking time, I can cook an entire pound of bacon at one time, and clean up is a cinch!

Why is oven-baked the best method?

Until I tried it, I assumed cooking in the oven would make an even bigger mess than using my cast iron skillet on the stovetop. And time-consuming. Just the opposite is true. I can prepare an entire pound of bacon without having to baby it and tend to it. Oven-baked, it stays flat with no splatters. Even better? The “fragrance” of bacon is short-lived.

END_OF_DOCUMENT_TOKEN_TO_BE_REPLACED

Celebrity chef Alton Brown contends that a kitchen tool that does only one job is mostly useless. He calls anything like a pickle fork, garlic press, strawberry stem remover, or hot dog steamer a “unitasker.”

His advice? Don’t waste your time and money on any kitchen tool if it is only good for one thing. It will just take up valuable space, eventually becoming clutter.

It sounds a bit like Alton spent time with my grandma who was big on buying a sack of flour to bake bread, then sewing the sack into a dress, and when the dress wore out she would cut it into rags for a rug. Or pieces for a quilt.

END_OF_DOCUMENT_TOKEN_TO_BE_REPLACED

There’s just nothing that screams late summer like sweet corn when it’s fresh, hot, and slathered with butter and salt. Today, I want to share with you four brilliantly delicious ways to cook corn on the cob that are sure to thrill and delight you, your family, and guests, too.

Corn on the cob is a summer staple that should be part of every summer celebration and backyard cookout because not only is fresh corn cheap when it’s in season, it’s quick and easy to prepare, too! But first, let’s talk about how to start with the best ears of corn. 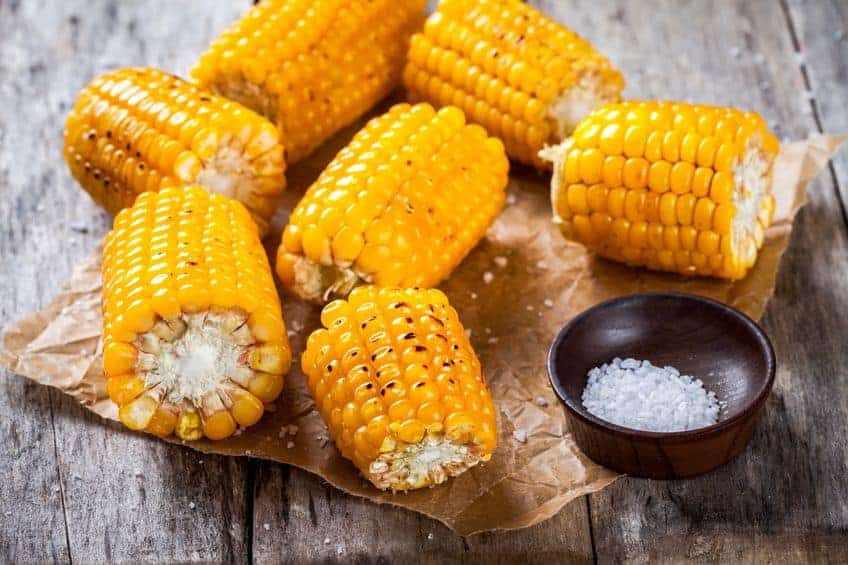 There you are in front of a pile of freshly-picked, in-the-husks, sweet corn. You want to select ears with these characteristics:

There must be as many ways to prepare fresh corn on the cob as there are people who love to eat it. Here are my favorites:

END_OF_DOCUMENT_TOKEN_TO_BE_REPLACED

Seasoning packets from the supermarket may be convenient, but they have drawbacks—not the least of which is they’re relatively expensive! I just checked Lawry’s Taco Spices and Seasonings Mix—! I just hate to pay that much for so little. And I don’t have to because I’ve got a great recipe to make taco seasoning mix myself, using ordinary spices I have already. As a bonus know exactly what’s in it, and how old the ingredients are. 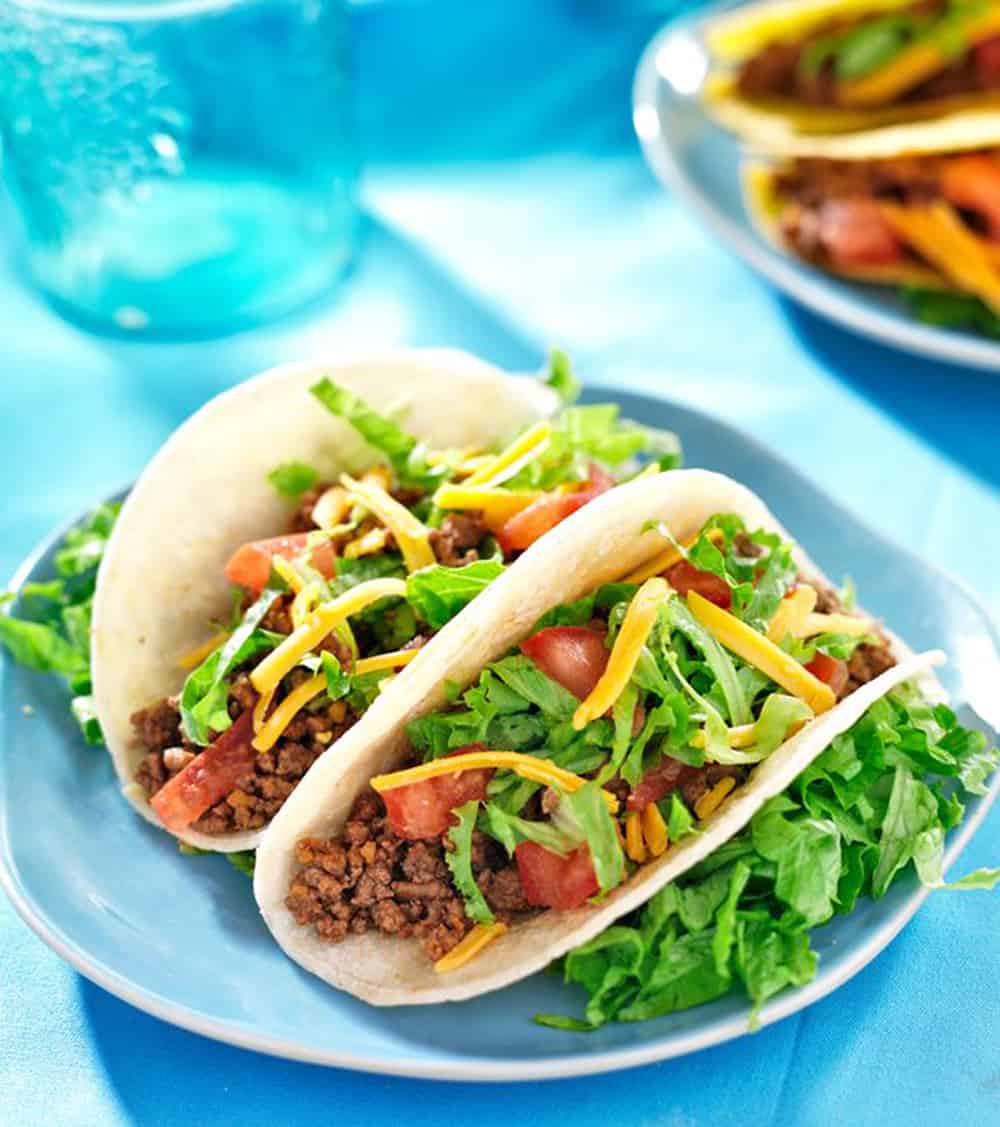 The recipes that follow call for the amount of seasoning you would find in the typical supermarket seasoning packet—about 4 1/2 tablespoons of mix.

While you could make the amount you need as you need it, a better idea is to make a bunch while you’re at it, then keep it tightly sealed in your spice rack. It’ll come in handy more times than you can imagine. The recipe multiplies well.

Enjoy this simple mix and the two family-friendly recipes that follow for both beef and chicken tacos. Yum!  END_OF_DOCUMENT_TOKEN_TO_BE_REPLACED

Just the other night I suffered a kitchen disaster. I hate when that happens. I ruined an entire pot of pasta because I got busy and was not paying attention. By the time I realized, the pasta had cooked way beyond al dente, all the way to total mush. 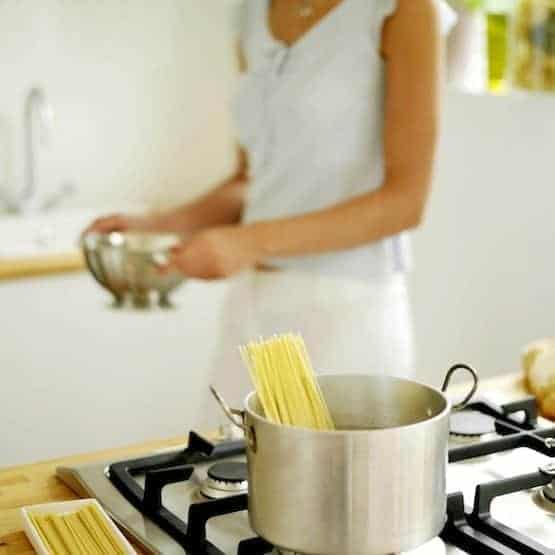 It killed me to dump the whole thing down the disposal, but there was no way to undo that disaster.

Thankfully, that’s not true for every cooking mistake. This is a list you’re going to want to keep handy just in case.

It’s a common cooking mistake. If you’ve added far too much salt to a sauce or soup and you have enough ingredients, double the recipe or make more by half, then mix it in with the salty batch a bit at a time until you’ve reached your desired flavor.

Another trick is to add a bit more unsalted water to the mix, provided this will not also dilute the flavor.

Don’t toss it until you’ve tried this neat trick: Use your cheese grater to quickly scrape off the burned layer. Works like magic!

The first sign of a cake that’s not done is that sinkhole in the middle. Once cooled you cannot re-bake it. But don’t worry. This is not a hopeless kitchen disaster.

Break the cake into pieces (even those parts that are undercooked) and combine them with whipped cream and fresh fruit to make dessert parfaits or one large trifle.

ENJOY: 25 Items Under $25 to Help Organize Your Life

END_OF_DOCUMENT_TOKEN_TO_BE_REPLACED

Whether you are naturally gifted in the kitchen or had the pleasure of growing up with some talented cooks who were happy to give you a few pointers along the way—lots of people shy away because they find cooking complicated, and even a bit confusing. 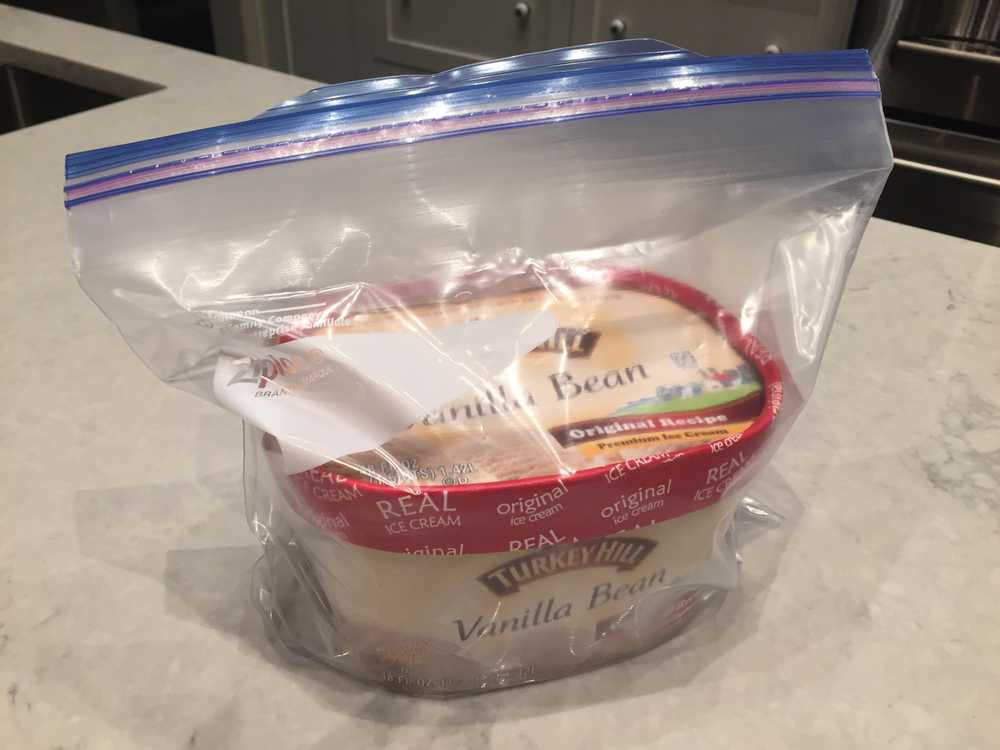 Fortunately, there are tons of great little tricks that can help anyone improve their cooking game, and maybe get some interest in further developing their skills. Here is a run-down of some really fun and useful cooking hacks that can benefit everyone, regardless of skill level.

Ice cream—it’s in the bag

Ice cream can get rock hard in the freezer and it takes ages to thaw out just enough that you can eat it. A simple trick to keep it just the right consistency is to put the container in a plastic freezer bag before throwing it in the freezer.

END_OF_DOCUMENT_TOKEN_TO_BE_REPLACED

Celebrity chef Alton Brown contends that a kitchen tool that does only one job is mostly useless. He calls anything like a garlic press, strawberry stem remover or hot dog steamer a “unitasker.”  His advice? Don’t waste your time and money on any kitchen tool if it is only good for one thing.

It sounds a bit like Alton spent time with my grandma who was big on buying a sack of flour to bake bread, then sewing the sack into a dress, and when the dress wore out she would cut it into rags for a rug. Or pieces for a quilt. END_OF_DOCUMENT_TOKEN_TO_BE_REPLACED